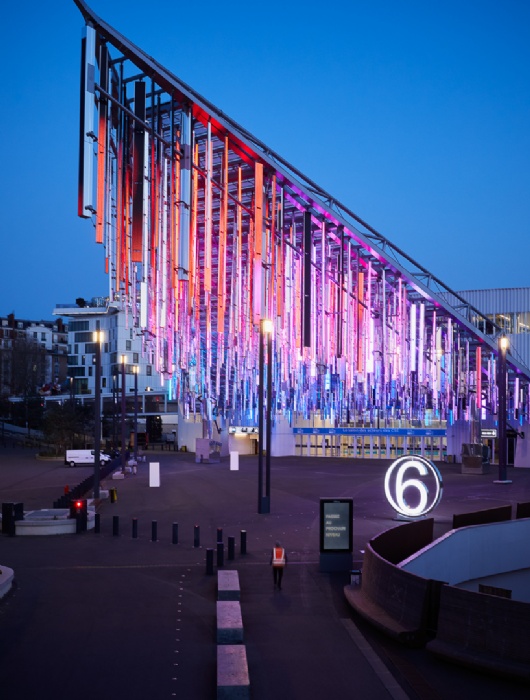 ewo’s lighting fixtures have been chosen for the prestigious lighting project around Pavilion 6 at the Paris Expo Porte de Versailles, or Parc des Expositions, which is the largest exhibition centre in France, located in the 15th arrondissement at Porte de Versailles Métro station. François Gaunand (Seulsoleil Agency) was the mastermind of the global lighting concept for Pavilion 6, which was designed by Valode & Pistre and Atelier Jean Nouvel, and entrusted ewo with the delicate and sculptural appearing lighting of both, the main entrance area as well as the lighting around the canopy.

"The challenge was to design a lighting system that would meet the two conditions of the canopy: a 25° orientation and a 45° orientation.
The two orientations mean that the illumination of the floor under the canopy is different. The lighting integrated in the canopy no longer illuminates the same area because it recedes towards the façade due to the building structure becoming higher.
We compensate for these variations with a double system by installing two different optics in the outer conical masts.
The uppermost optics of the masts compensate for the loss of luminous flux in the part of the canopy that is less illuminated due to the vertical alignment at 45° ", explains François Gaunand.

Overview of the lighting solutions:

Lighting of the forecourt and entrance area
Lighting around the canopy and Pavilion 6 by custom-made light columns to enable standard-compliant lighting for public facilities.
François Gaunand and his team developed a specific lighting device in collaboration with ewo. 12 metre long light columns with the ewo optics (LP33 satiné - Asymmetric Extraforward Throw / 3,000 K / 400 mA).
Two models of this column were developed – a single light column in the exterior of the building and a double light column at the edge of the canopy.

The six series of optics have an orientation system (-10° / +10°) that allows the adjustment of the light distribution in the different lighting zones and thus does not conflict with the integrated lighting in the curtain. The result is homogeneous lighting that ensures functional light and thus safety for visitors, while allowing the scenic effect of the canopy’s lighting design to remain in the foreground.